Coat of Arms: Wearing Your Story It’s thought that initially a knight’s coat of arms was developed to make it easier to identify the armored warriors while they were fully suited.  The original markings were crude, but served their purpose so well, the system eventually grew until they became the colorful images we know today.

Whether it’s true coat of arms were first used to identify knights or not, there is no doubt the images eventually were used in this manner.  Coat of arms’ images grew larger and more widely used over time.  Eventually, all nobles and knights were using the system and the image grew until you could tell, not just the noble’s house, but his liege lord, wife, position, and even any honors he had been awarded.  In a sense, a life story.

This article has been updated based on the 2019 May Vanguard release.

Coat of Arms in Feudums 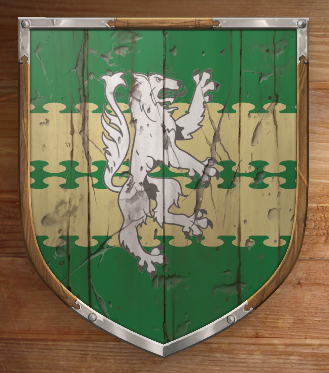 Coat of arms in Feudums, just like in real-life medieval life, take an important role as the most promiment, unique visual id for Noble Houses and in-game characters. In Feudums, it is mandatory that each player create a unique coat of arms which will be then used to represent them. Created in the game's built-in coat of arms editor, these heraldic illustrations, called House Standards, will show the fundamental identity and values of their Noble House, serving as the bloodline's heraldic signature during their encounters with other players. Their standard is also visible on their profile or at their posts on the public forums.

In each Noble House there are also in-game characters. They are the actual representative of a Noble House (a player) on a specified game world. For their important role in immersion, each character can bear their own, slightly personalized coat of arms, in order to reflect their personal character, always derived from the House Standard. Their personal coat of arms are shown on the associated Game Worlds. 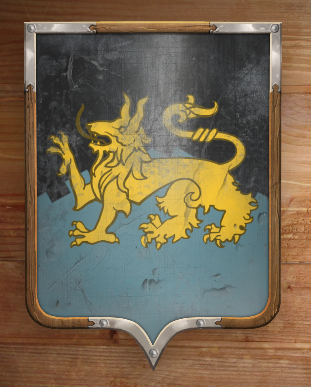 Personalizing the coat of arms for each character is however not mandatory, but an option. A player can decide to simply use their unaltered House Standard as the Personal Coat of Arms of their characters.

The initial set of the selectable heraldic devices is limited, and established coat of arms cannot be freely reformed whenever the players wish so. Throughout their journey, the players may, of course, find multiple ways to reform their coat of arms and apply new heraldic devices, or enrich the current ones, as it was hinted in an earlier article. Instead of randomly changing them, their coat of arms will develop with their Noble House and characters organically. 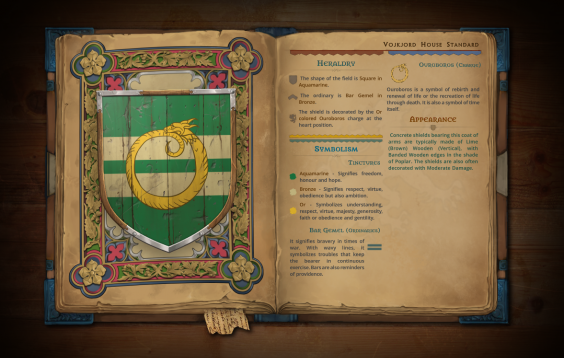 A coat of arms is made up of individual parts (both heraldic devices and physical attributes) and Feudums’ players will have an extensive selection to choose from although there will be some designs, colors, and symbols set aside for achievement unlocks or Golden Forint purchases (game play will not be affected).

The main heraldic devices which make up a coat of arms design include: the field (base) of the shield, the division of the surface area (called the ordinaries) and any symbols (also referred to as charges). All of these devices come with a rigorously defined color (called tincture). These devices are the traditional parts of the design and most have their own symbolic meaning.

It is defined by two important factors: the shape of the 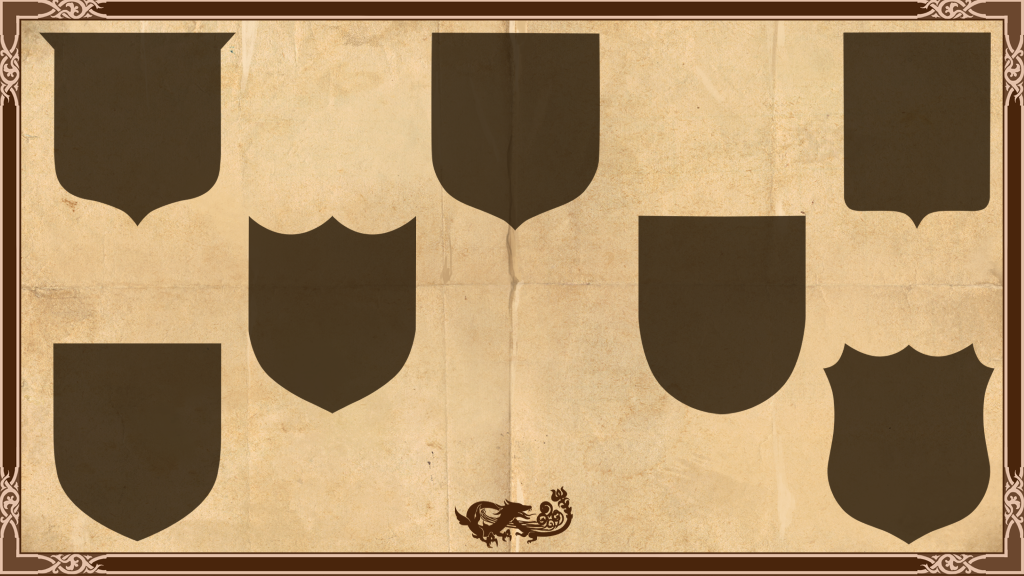 shield and it's tincture. Shapes don't have any particular symbolic meaning; instead, they have changed through time and regions and have been adapted to the type of warfare or purpose that they served.  Shape can therefore speak about the origin and age of the coat of arms.

There are several supported shaped shield designs in Feudums ranging from the classic, to edged, or to the continental look, derived from real-life European heraldic heritage and ages. 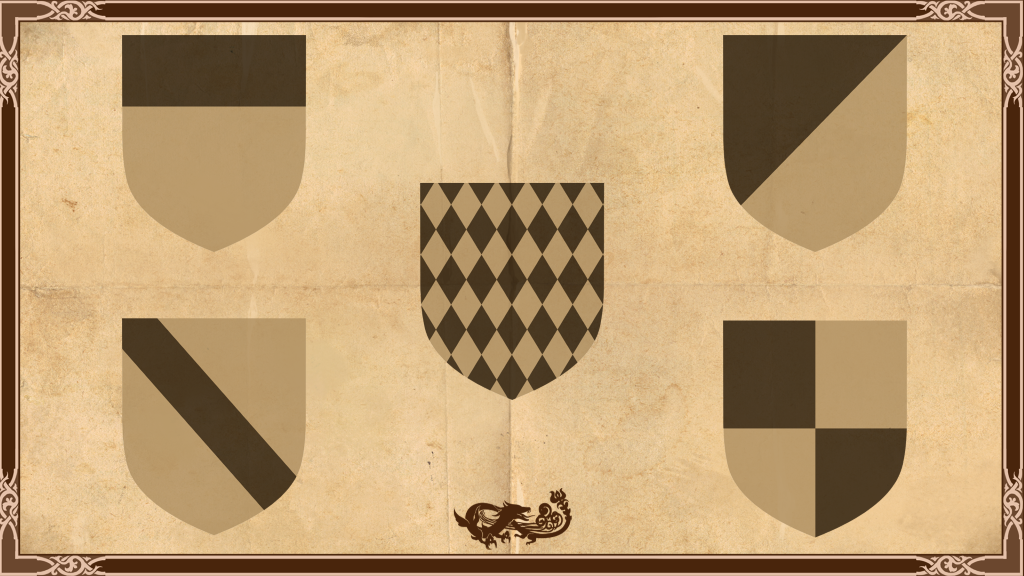 The ordinaries are the division or partition of the shield. Ordinaries are defined by their type, tincture and if applicable, the lines of partition. Most ordinaries are simple geometrical figures, bounded by lines and running from side to side or top to bottom of the field. There are a multitude of ways a field could be divided up, and we support most of them. 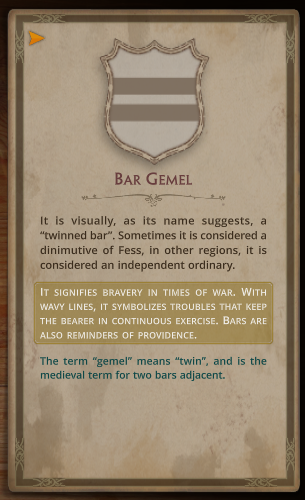 Ordinaries are often categorized in heraldry into different groups, like: 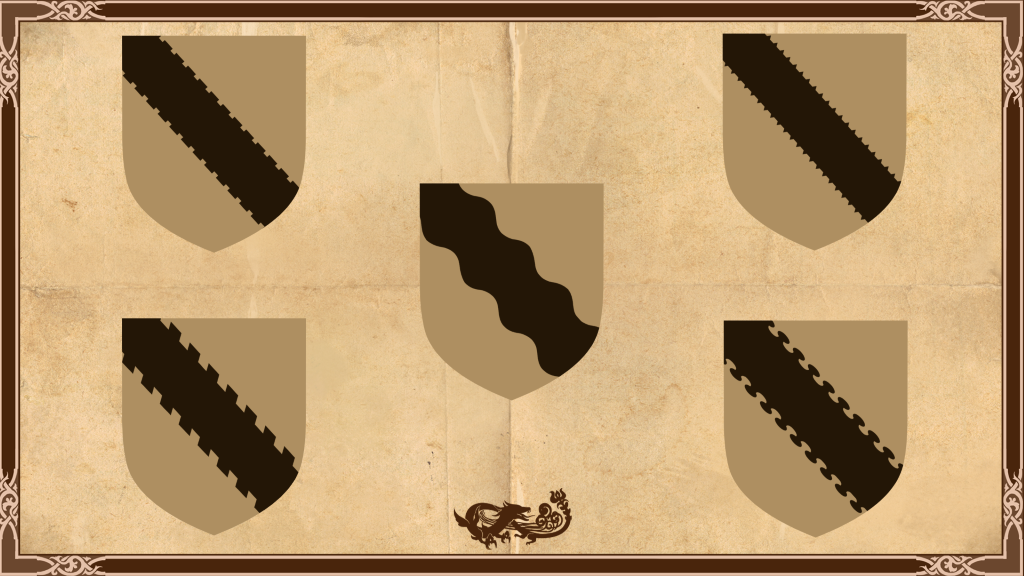 Heraldic lines are used to divide and vary fields and charges in heraldry. Lines are by default straight, but may have many different shapes. Not every ordinaries support multiple variations for lines, but where they do, this is another medium to add to the story.

A charge is an emblem or device occupying the field of a shield. This may be a geometric design or a symbolic representation of a person, animal, plant, object, heavenly body or other device - anything found in nature may appear as a heraldic charge. 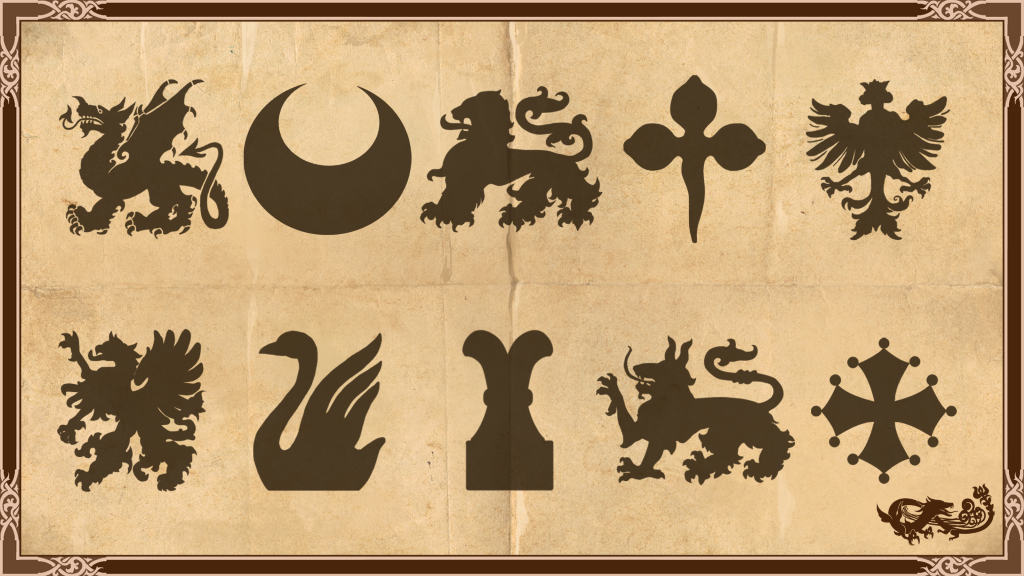 Charges are described by their type, tincture and where applicable, their attitude and position. Technically, most ordinaries are also part of charges, but both for their more specific purpose and for clarity, they are only counted in their own group among heraldic devices in Feudums.

Some of the most frequent charges are predatory animals, birds, plants and monsters, but it may differ by region and age.

Their most typical categories are the following:

There are well over a hundred of charges that are currently supported in Feudums, including all the sub-categories described above.

Colors used by knights and heraldists were limited to the available hues at the time. Some colors were limited because they were not available yet or were reserved, such as purple, for a particular 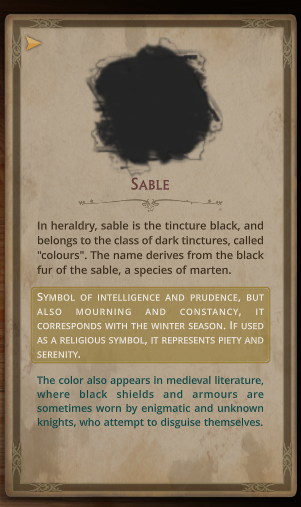 reason – in this case, royalty. Then, particular colors were only used in specific regions, or ages, typically, where or when the colors could be produced.

Heraldic colors are often categorized by their value and purpose, like

Both traditional heraldic colors, as well as many of the regional historical palettes are supported by Feudums, although, like shield shapes, some may be reserved for achievements or for sale.

Between field, ordinaries, charges, tinctures, heraldic lines and the like, there are millions of variations in Feudums' built-in editor to design your unique coat of arms. And then we haven't talked a word about...

These attributes are not part of the coat of arms heraldry but still play a major role in their visual representation. They are meant to add an additional layer to a coat of arms "design" by putting it to a down-to-earth environment, ie., how you would typically encounter with it on the field.

The physical attributes include: the material of the shield, the type of it's edges, and the additional visual features it may have. Most of these come with a color tone (called shade), based on the material or physical form of the attribute. 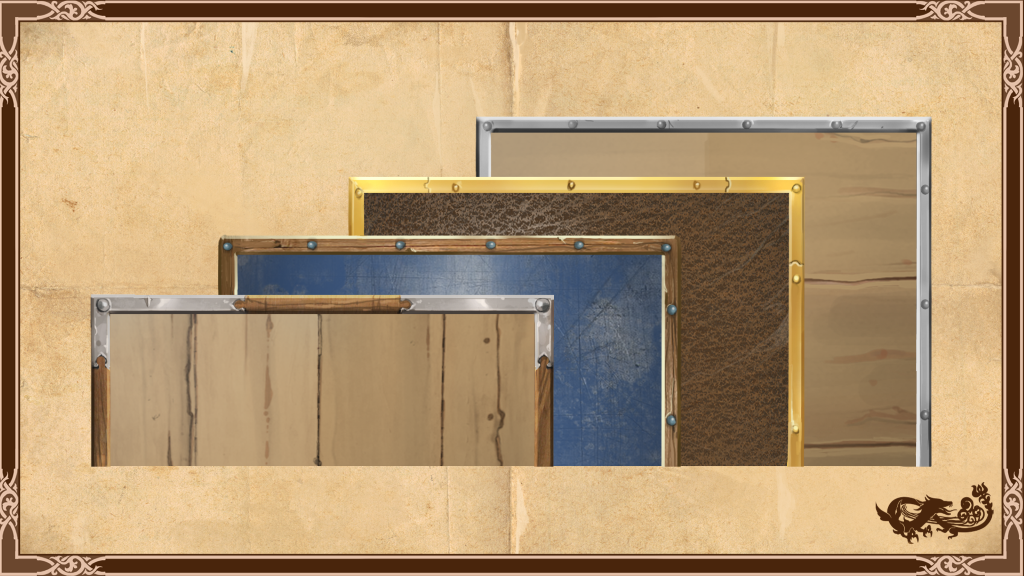 These are the available materials a shield is typically crafted from, like different version of woods, metals and leather. They can all have some variations (ie. elegant or sturdy metal, different planks for wooden, etc.) and those can have a few color schemes. A material is represented by its type and shade. They do not bear any heraldic meaning, but some materials still attributed to have specific symbolic or magical powers. 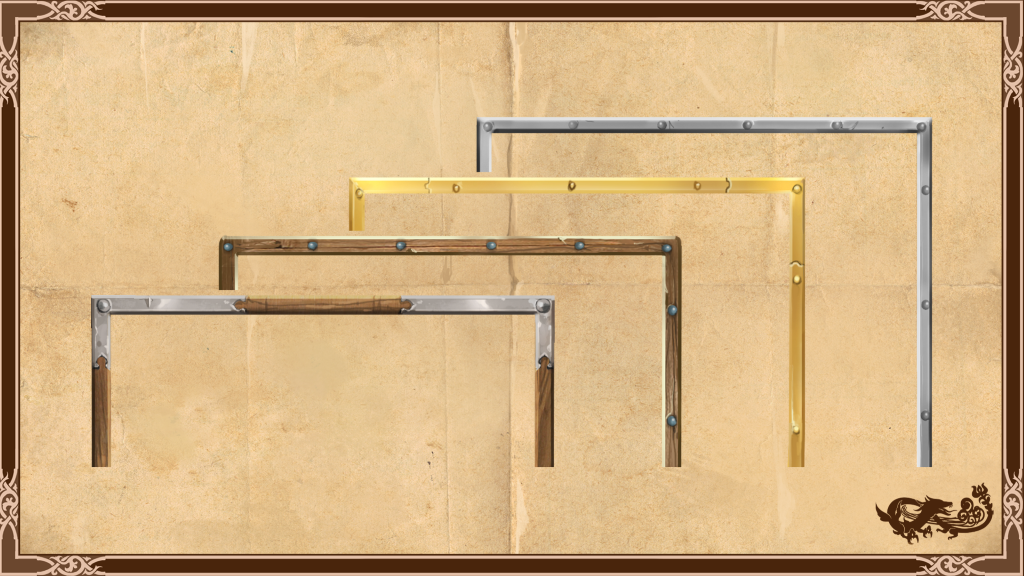 The form and material a shield's frame (or edges) is typically made from. Similarly to shield material, this is mostly a composition of metals, leather and wood in a dozen or so color schemes. An edge is always represented by it'a type and it's shade. Some of the expensive variations can be used to represent the bearer's wealth.

Features are visual features that are deepening the lore and myths of the first or current bearer of the coat of arms, like damages on the shield.

Creating Your Coat of Arms

When it comes time to develop your own "tale" via the editor, doing it is as easy as following 7 steps: 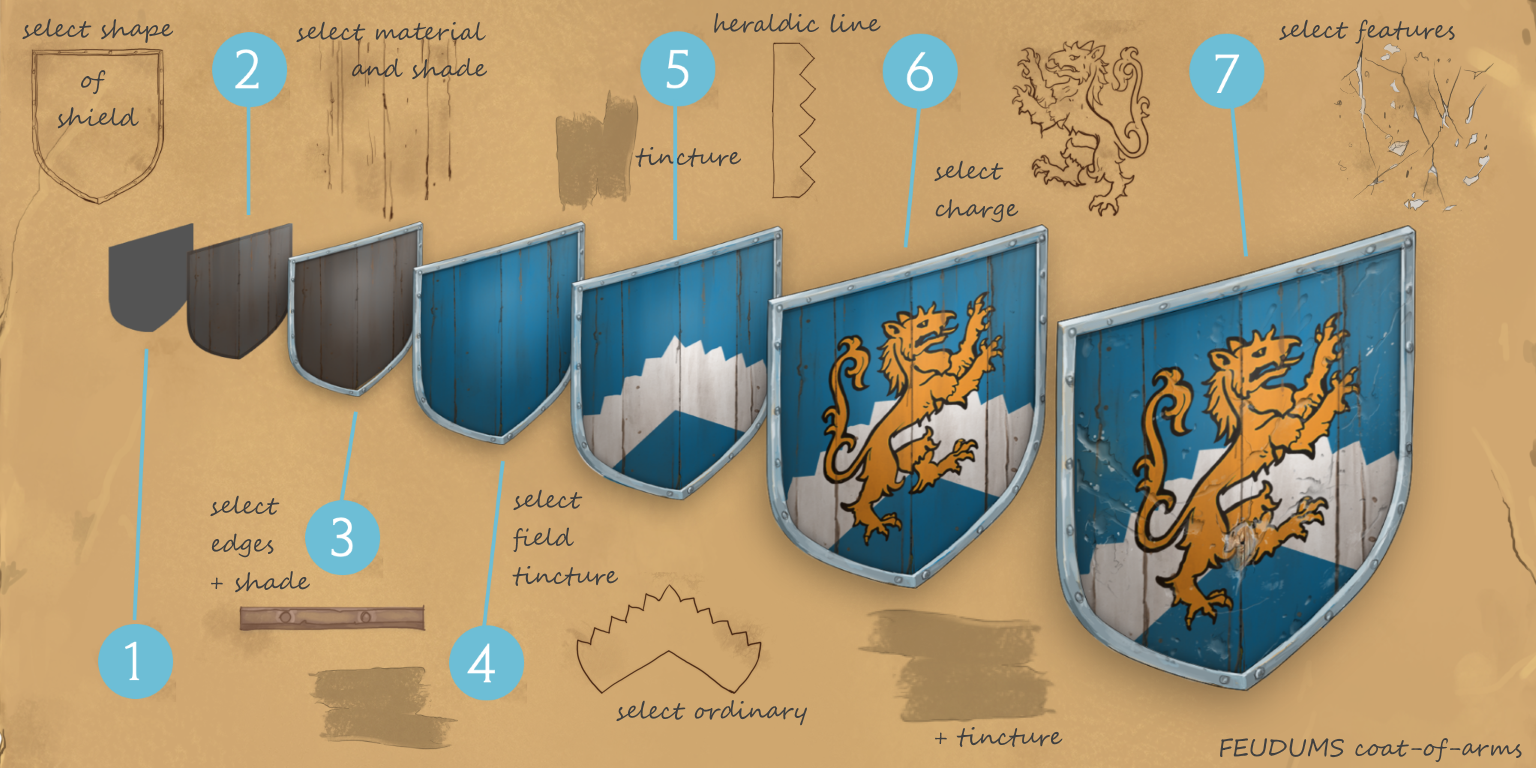 At the start, if you choose a shape, a shield with the default material and edge will be automatically assigned. When creating a new coat of arms, you can also use the Randomize button from the top buttons to have the editor create a valid design for you.

Any parts, or their attributes can be altered individually, though dependent parts are updated accordingly (ie. if you have chosen a metal variation with a golden shade, and at a later time switch to a wooden material, the golden shade is reverted to the default wooden shade). Note: Hovering any part of the UI will reveal further contextual notes and hints.

Tips for Coat of Arms designers 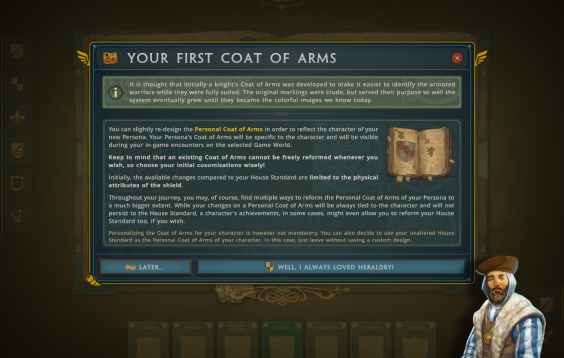 listen to your advisor, then do what you please!

Real-life heraldry had some basic rules for making more distinguishable and generally good-looking coat of arms. These rules are not mandatory in Feudums, but may still be useful for designing your family coat-of-arms. 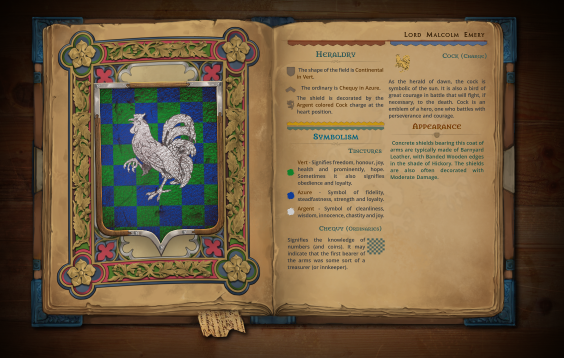 Ser Malcom grew weary waiting for his liege lord's decision to advance and engage the infidel army spread out in front of him.  When he saw his lord's messenger riding his way, without hesitation, he charged forward. Although a few of the enemy's arrows bit him, Ser Malcom was solely focused on engaging the enemy infantry.  Unknown to Ser Malcom, his early start forward propelled him nearly 100 yards ahead of the rest of his knights.  Upon reaching the enemy line, enemy soldiers tried to drag the lonely Ser Malcom from the saddle but he bravely fought them off.  He personally slew more than 12 enemy infantry despite four arrow wounds and numerous sword cuts.  After the battle was won, his priest administered last rites because no one thought he would survive his wounds.  Upon his miraculous recovery, his lord allowed him to change his heraldry to announce to the world his courageous acts on the battlefield that fateful day.

The emblem rewards Malcom's memorable battlefield success as well as his recovery while the charge recognizes the joy he felt slaying the infidel soldiers.  The colors reinforce both his battlefield prowess and the happiness he had being a weapon for his lord. 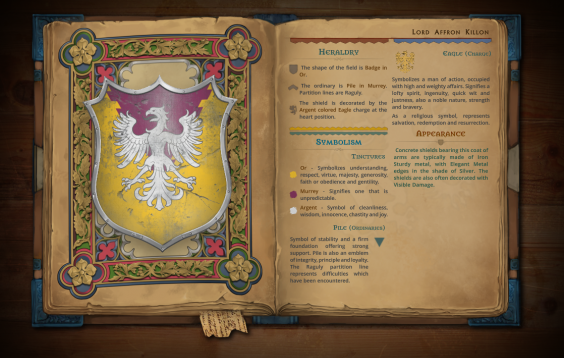 As a cousin to his Royal Majesty, Lord Affron has always had access to the king.  But his blood wasn't the only thing that allowed him such familiarity.  Do you remember the seige of Mortage?  Affron was called upon by his leige to sally forth from the city to engage the enemy and did so without hesitation despite the odds.  Or the time Affron called out Lord Remay's champion for single combat because of his callous words regarding his liege?  Affron has proven his loyalty to his Majesty time and time again.

His small use of the royal purple recognizes his blood line. The eagle shows his utmost loyalty to his leige.  The ordinary recognizes his unique place as one of the king's most loyal retainers.

Be sure to check other, "real-life" examples from our brave players, made with the previous version, at the Coat of Arms Contest. Take a deep breath and post yours too!