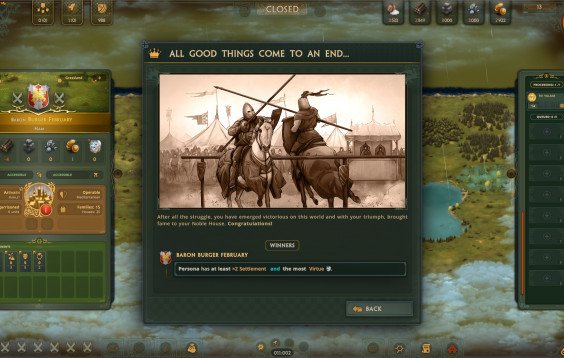 In FEUDUMS, you play turn-by-turn simultaneously with other players. Each turn has two phases: a long Planning Phase and a short Execution Phase.

After plans are executed, you and all other players are sent results, so you can watch what happened and reflect on the action.

Don't worry; this is no boring text-only log, but an animated Recap which has all movements and other changes recorded, and you can watch this over and over. Maybe you want to reflect on your strategy, or maybe you want to repeatedly marvel at your awesome success!

If you missed multiple turns, your Recap will contain all changes relevant to you since you were last online, so you will have everything you need to plan your next move.

Rinse and repeat two-phase turn execution until the game is over. These are the very basics. We have Seasons and even Years built on top of Turns.

Seasons take a few dozen turns by default, and due to being a crucial part of feudal life, will heavily influence your strategy, as a cold winter for your marching troops or a harvest time with your levies abroad can be deadlier than your flesh-and-bone opponents.

Different seasons also have different priorities. This is a living world, so the game automatically takes care of the default seasonal priorities for your servants (so peasants sow, weed and harvest on their own, gather and fix their home when there is no work on the lands, and so on) - unless you give them different orders.

Here are some additional explanations, just to show you some of the considerations that lie behind our choices - in case you're interested :)

Also, you're free to set the pace of your private games - if you have the feature - as you see fit.

I like,and o is this is looking good:)

thank you! :) we'll be adding more articles about the various topics covered by the game (ie. how vassalization, diplomacy, etc works), and we have tons of screenshots and feature videos to show still, so keep an eye on us :)

I like turn based games and play a lot of them. Mostly I play turn based in single player scenario / campaign games which work well, the downside being the stupidity of any AI & game designers building in artificial AI bonuses (let the AI cheat) to offset player intelligence.

One of the things that I find attractive about feudums is that it is MMO & turn based, if it works I can see myself spending a lot of time playing and pitting my skills with and against other players.
I have played turn based 'play by email' which can work but often leads to victory through last person to stop responding which is kind of hollow.

My concern would be if there was a need to log in every hour continually to take your turn over an extended period - while I like gaming I also have a life and am not going to schedule family time around playing a game.

I guess this is the way you fit life in - scheudling the overnight & busy irl turns? How much of an advantage will this be to the every hour addict over the committed but casual gamer?

Does that mean the whole game is 10 hours long? 10 turns for a whole game dosent feel very long?

10-60 minute Planning Phase refers to the length of a *single turn* :) We've fortunately had this topic covered in our most recent interview (link: Indiedb.com ), which should be aired later today (currently awaiting authorization on indiedb's side) - you may want to check it for more info when it's out. :)

The queue should be enough for a few days, and unlike in other titles, you can set basic automation for your realm and units - so if an enemy attempts to invade you overnight, your troops may react if you're not around to buy you time (granted, you let them to engage in battle in your absence). You can also let your liege lord to be notified and able to intervene in your absence.